Rachael began working in management during college, starting as an Assistant Manager at Gap, Inc. While not directly related to her field of study, Rachael found a passion for managing people and processes. Rachael remained with Gap after obtaining her degree. Rachael spent 15 years with the company, becoming an Area Manager and overseeing the operation of 3 stores in southern Pittsburgh, with up to 100 employees, 15 managers, and $5,000,000 in annual volume. Rachael left Gap to explore an opportunity with Cintas, working first as a Human Resource Manager and then as a Service Manager. As a Service Manager, Rachael was responsible for 8 rental routes and approx. 500 customers. While at Cintas, Rachael was also responsible for overseeing the location’s OSHA VPP Star Certification application, which the location ultimately was awarded.

At Reclamere, Rachael fills many roles, including Project Manager, Security Team Member, Payroll and HR, and managing the many certifications and requirements that are needed in our company.
Speaking At
D3 Beyond the Dark Web: What Will They Think of Next? 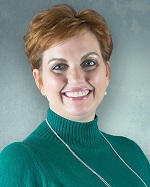