He has been interviewed on the subject of “White hat hacking” for Microsoft’s “Roadtrip Nation” television series, was featured on IDG Enterprise’s CSO Online publication by Ryan Francis on social engineering and is a regular contributor to NTT Security’s #WarStoryWednesday blog series.

Tim has held management, IT and physical security roles across multiple industries, including healthcare and government. His professional experiences cover traditional/non-traditional hacking techniques that include network, wireless, social engineering, application, physical and scenario-based compromises. These techniques have led to highly successful Red Team assessments against corporate environments. By continuing to share these experiences, he hopes to further contribute to the InfoSec community.
Speaking At
G7 Getting the Most Out of Your Covert Physical Security Assessment: A Client’s Guide 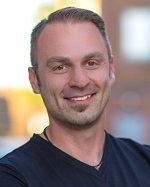